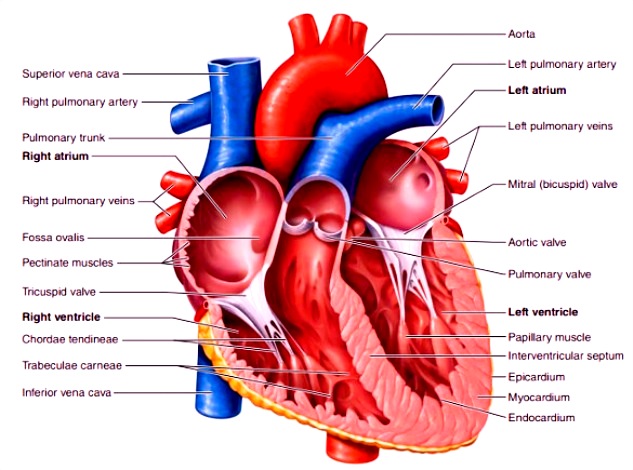 A. Heart and heart wall layers

1. The heart is located in the left side of mediastinum
2. The heart consists of three layers. Cardio Vascular System 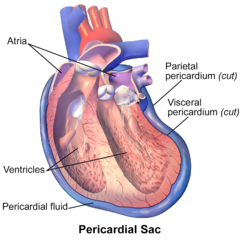 1. Encases and protects the heart from trauma and infections.
2. Has two layers

C. There are four heart chambers

D. There are four valves in the heart

1. There are two atrioventricular valve the tricuspid and the mitral, which lie between the atria and ventricles.

2. There are semilunar valve the pulmonic and the aortic. 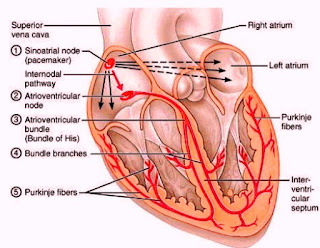 G. The bundle of His

1. Stimulation of sympathetic nerve fibres release the neurotransmitter norepinephrine, producing an increased heart rate, increased conduction speed through the atrioventricular node, increased atrial and ventricular contractility, and peripheral vasoconstriction. Stimulation occur when a decrease in pressure is detected. Cardio Vascular System
2. Stimulation of the parasympathetic nerve fibres releases the neurotransmitter  acetylcholine, which decrease the heart rate and lessens atrial and ventricular contractility and conductivity, stimulation occurs when an increase in pressure is detected.

1. Baroreceptors, also called pressoreceptors, are located in the walls of the aortic arch and carotid sinuses.
2. Baroreceptors are specialized nerve endings affected by changes in the arterial BP.
3. Increases in arterial pressure stimulate baroreceptors, and the heart rate and arterial pressure decrease.
4. Decreases inarterial pressurereduce stimulation of the baroreceptor sand vasoconstriction occurs, as does an increase in heart rate.
5. Stretch receptors, locatecl in the vena cava and the right atrium respond to pressure changes that affect circulatory blood volume.
6. When the BP decreases as a resultof hypovolemia, a sympathetic response occer,causing an increased heart rate and blood vessel constriction when the BP increase as a resultof hyper volumia an opposite effect occurs.
7. Antidiuretic hormon (vasopressin) influences BP indirectly by regulating vascular volume.
8. Increases in blood volume result in decreased anti diuretic hormone release, increasing diuresis, decreasing blood volume, and thus decreasing BP.

Thanks for reading. if you have any query please comment below. we answer your query as fast as we can.

The Heart Chambers and Valves

One thought on “cardiovascular system”